Paroxysmal Nocturnal Hemoglobinuria (PNH) is a very rare and debilitating disease of the bone marrow that affects the blood and major organs. It is a chronic, life-threatening illness and can have devastating effects upon a patient physically, mentally and emotionally.

In people living with PNH, the red cells produced lack a protein called CD59, which would normally protect them from being destroyed by a substance in the blood called complement. Complement forms part of the immune system and is activated when cells foreign to the body  are identified. When activated, complement has nine cascading levels of intensity to fight infection. Think of them as “bullets” which gradually increase in size.

The destruction of the red cells by complement is called haemolysis. Haemolysis occurs in everyone, as old blood cells are replaced by new ones. In people living with PNH, however, haemolysis usually occurs much faster and outside the circulation (in places like the  spleen and liver).  When haemolysis occurs at a rate that causes haemoglobin to drop below normal levels, haemolytic anaemia occurs. It was originally thought that the red cell  destruction occurred during an attack, called a haemolytic crisis at night – hence the name “paroxysmal nocturnal” – however it has been proven that haemolysis occurs constantly. The rate of hemolysis, or destruction of the cells, varies between patients and usually relates to the severity of symptoms experienced.

A red blood cell contains, among other substances, proteins and red haemoglobin pigment.  Then the cell is destroyed the haemoglobin that is released into the circulation is converted by the liver into bilirubin that, in excess, is deposited in the eyes and skin, causing jaundice. The haemoglobin pigment is also excreted quickly through the kidneys, resulting in haemoglobinuria” which literally means haemoglobin in the urine.

PLEASE NOTE: This information is intended for general knowledge only and is not to be substituted for medical advice and its accuracy is not guaranteed. Please consult with your medical practitioner for further information regarding your personal circumstances.

This information has been prepared by PNHSAA Inc., is copyright protected and is used with their permission. 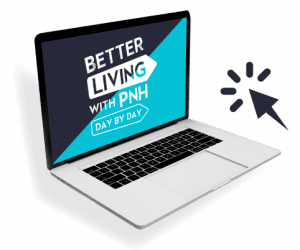 NEW! Click here to access Better Living with PNG a comprehensive guide
with a holistic approach to better
living with PNH.